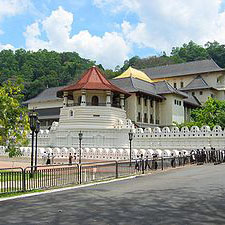 The picturesque town of Kandy is located 115 km northeast of Colombo, on the banks of the Maheveli Ganga River.

In the center of the city is an artificial lake, the creation of the last king of Kandy. And in its center on a small island stands the Summer Palace, where the king once kept his harem.

On the shore of the lake is Dalada-Maligawa - the Temple of the Sacred Tooth of Buddha. It is believed that the Tooth appeared on the island in 311 g in the hair of Princess Hemamala. The state capital was the city where the Tooth of the Buddha was located. When the Tooth arrived in Kandy in 1590, King Vilamaladarmasuriya I built a two-story temple on the territory of the royal palace, where the relic was placed.
The Temple of the Tooth Buddha is part of a huge complex of buildings: to the north of the temple there was the Royal Palace, the Queen's Palace, the Hall for Audiences. To the east of the temple, on the border with the lake, there is the bath of Queen Ulpe Ge, converted into a library by the British (and now a police station).
Near Dalada-Maligawa there are three Hindu temples dedicated to the gods Nat, Pattini (the goddess of chastity and health, popular among Buddhists) and Vishnu. Just a block away is Kataragama Devala, one of the city's most popular Hindu temples, dedicated to the god of war Skanda. Another prominent landmark of the city, the so-called Royal Pavilion at the foot of the mountains, built by the English governor in 1834. Currently, the pavilion is the official residence of the President of Sri Lanka in Kandy.
Since Kandy is the religious capital and center of Buddhism in the country, there are two main monasteries of the country: Asgiriya and Malvatte.