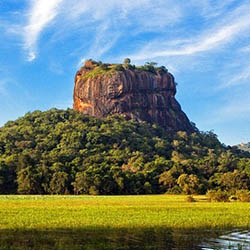 Sigiriya is not just a rock, it is not clear where it came from on a flat plain. It is a stone reminder of what happens to those who forget about karma - the universal law of cause and effect.

In the V century. BC e. Kasapa, the illegitimate son of the then king of Datusena, afraid that power would not go to him, but to his brother, threw his own father off the cliff.

Having become king, he realized that more than anything in the world he was afraid of revenge from his younger brother, relatives and everyone who surrounded the murdered monarch. Then Kasapa decided to build a citadel palace in the most inaccessible place, on the Sigiriya rock. At an altitude of 370 m, pools, fountains, galleries with frescoes depicting beautiful women appeared (some of the frescoes can be seen today). The most stunning was the entrance to the palace - through the mouth of the incredible size of a lion, carved out of stone (now only giant paws are left of that lion). One could get to the palace by rope ladders, which were lifted up at sunset. After 18 years of this luxurious life, Kasapa committed suicide. And hermit monks settled in his palace for many years.

Now on Sigiriya you can climb a spiral staircase that encircles the rock. If you manage to get rid of beggars (in Sri Lanka they are the most intrusive and inventive, for example, when going uphill they push from behind and ask for money), then you can think about the inevitable punishment of any evil.