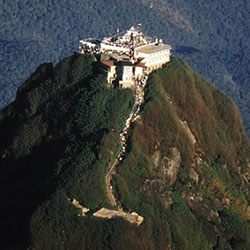 Thousands of believers climb to the top of Mount Sri Pada, trying to put their lips on the sacred relic - the footprint of the foot of Buddha Gautam, who once visited this place.

Back in 300 BC, the first Buddhist temple appeared here. But the mighty mountain is sacred not only to Buddhists. Muslims believe that the trail was left by Adam expelled from paradise, the same opinion was held by the famous Marco Polo.

Christians believe that the imprint belongs to the Christian apostle who preached in southern India - Saint Thomas, and the Hindus call the mountain Srivan Nadipatam, because, in their opinion, Shiva himself visited here.

Thus, the mountain unites all major religions, blurring boundaries and differences. The true origin of the mysterious footprint is still unknown.

What is it? Maybe a whim of nature? Maybe the work of a skilled forger? Or is it really a human footprint? But how tall should a person be who left a 160-centimeter imprint in the stone?

Scientific research at Adam's Peak has yet to take place, which allows all versions to exist simultaneously. Climbing one of the most majestic peaks in Sri Lanka is possible only between December and May. In other months, it looks rather gloomy, impersonal and colorless.

Every night in the dry season, pilgrims from all four religions and ordinary tourists rush to the top. During the day, it is very difficult to overcome the steps under the scorching sun, so excursions to Adam's Peak are always night. The shortest route consists of a kilometer climb, which in turn consists of 5,000 steep steps. The night rise, illuminated by daylight lamps, has another plus - a unique sunrise. It is for the sake of this fantastic sight, along with a visit to the sacred imprint, that the difficult ascent is worth overcoming. An iridescent glow encircles the mountain, and unprecedented mirages appear over the sacred footprint. The picture is complemented by the constant sounds of bells carried by pilgrims. Making the last dash to the top after several hours of hard way, it is worth drinking hot tea and resting a little.

It is imperative to take into account the weather conditions at Adam's Peak - a piercing wind and freezing temperatures at night make tourists and pilgrims dress warmer.

Finally, the goal is achieved, the top of the mountain is taken and it remains to relax, watching the fireball of the sun rising above the ocean waters, and the cone-shaped shadow of the mountain moving over the valley. The pilgrims recite mantras, bow down and kiss the trail of the sacred foot, throw flowers into the recess covered with scarves.

Any tourist traveling to Sri Lanka should visit this sacred place, shrouded in centuries-old legends and mysteries, because perhaps it was here, for the first time on planet Earth, that a man's foot set foot. Having visited a grandiose peak, having seen this fantastic nature, you begin to understand that this is rather true than a fiction of religious fanatics. 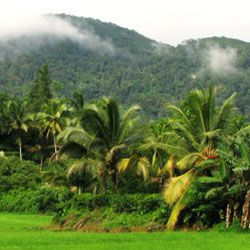 There are only a few corners left on Earth that have not been touched by a human hand. Sri Lanka is one of those places where you can see the unique preserved virgin forest called "Sinharaja". The reserve, which in 1988 was included in the UNESCO list as a "natural world heritage", is located in the southwestern part of the island of Sri Lanka, in its mountainous part. The area of the reserve is approximately 90 sq. kilometers, and in length it stretches along the ridge of mountains for 21 kilometers. Nine mountain peaks rise on this mountain range in the nature reserve area. Of these, the most notable is Sinhagala, the mountain to which tourists are most often taken.

This route is not too difficult, although the ascent uphill in conditions of high humidity and in clothing appropriate to the natural conditions of the reserve causes a little fatigue. However, all the unpleasant sensations are more than paid off by the magnificent view from the top. Trees, the tops of which are tightly intertwined with lianas, then sway under the gusts of the wind, then freeze, giving the impression of ocean waves. Sinharaja Forest, like any rainforest forest, is distinguished by a variety of animals that live there, and the huge trees with straight trunks reaching fifty meters are simply amazing.

According to its location and microclimate, the forest is divided into four levels. Representatives of the animal world are so diverse that it is almost impossible to list them. Various types of monkeys, leopards, deer, wild boars and armadillos live here, and of the smaller animals - chameleons, mongooses and snakes. Bird watchers feel in the reserve as in paradise. Indeed, of the 26 species of birds that live only on the island of Sri Lanka, there are representatives of the 21st family. Here you can observe a unique phenomenon - due to the lack of seasonal rhythms of life, plants of the same species can both bloom and bear fruit at the same time. The most turbulent life of birds, reptiles and insects takes place between the crowns of huge trees and the litter, at the level of the forest, called the sub-ceiling. There you can see rare snakes and lizards, and brightly colored butterflies simply stun with their diversity. It is also interesting that the leaves of trees at this level of habitation are arranged in such a way that water flows from them, which prevents the reproduction of microbes and the growth of moss. The lack of sunlight due to the dense crowns of trees and lianas entwining them does not allow the undergrowth to grow. Thanks to this, the movement of both large animals living in the reserve and humans through the forest is quite comfortable.

However, when going on an excursion, one should not forget that not only beautiful butterflies live in these forests, but also large, dark blue leeches that can even crawl under clothes. Therefore, to dress, despite the heat, you should wear clothes with long sleeves and put on long shoe covers on your legs. A cape on your head will not be superfluous, as leeches can fall from trees by the collar. But all these small inconveniences pale before the impression that this unique nature reserve - the Sinharaja rain forest - will make on you.

Comments (1)
diver
#18
This comment was minimized by the moderator on the site
Жаль ни чего не сказано каковы морские достопримечательства. Особенно интересен дайвинг.
diver
0
0
There are no comments posted here yet
Leave your comments
Posting as Guest
Login